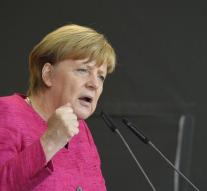 berlin - Over sixty million Germans can vote in the parliamentary elections on Sunday. The Christian Democratic CDU of Chancellor Angela Merkel is expected to win. Merkel would then become chancellor for the fourth consecutive time.

According to opinion polls, her main challenger, Martin Schulz of the Social Democratic SPD, would disappoint by about a fifth of the vote.

The German electoral system rejects small parties with a voting threshold of 5 percent. The German Lower House now has four parties. But the polls expect a newcomer in the Bundestag: the right-populist Alternative for Deutschland (AfD). This party could greatly disturb the atmosphere of calm and compromise in 'politics Berlin'. In addition, the conservative-liberal FDP (Freedom Democratic Party), headed by the flamboyant Christian Lindner, would return in the Bundestag.

Merkel is expected to become clear when the voting numbers and seat distribution on Sunday evening or Monday morning are working on coalition.