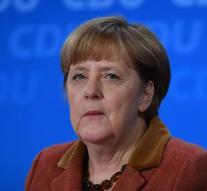 - German Chancellor Angela Merkel responded Monday disappointed at the defeat of her Italian colleague Matteo Renzi. The prime minister announced his departure after the Italian electorate voted Sunday in a referendum on sweeping constitutional reforms.

'I regret that did not end as the Prime Minister had wanted the referendum in Italy. I have always supported his reform policy, but of course it is an internal Italian decision which we must respect, 'Merkel told reporters in Essen.

The results of the presidential elections in Austria voted Merkel satisfied. She said at a party conference of her CDU to be happy in Essen with the profit of the leftist Alexander van der Bellen, who seems to have won with a big margin of his right-wing populist opponent Norbert Hofer of the FPÖ.