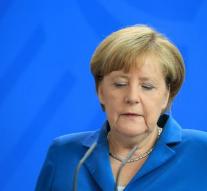 It reports the German magazine Focus. She holds Thursday its annual press conference in which she takes stock of the past year. That press conference was actually expected after the summer recess.

Merkel was officially since last Friday on vacation. Because of the bloody attack in Munich Friday, the chancellor returned a day later returned to Berlin to lead a meeting of its security cabinet. At the press conference Thursday Merkel will undoubtedly discuss the recent wave of violence in Germany.


Through a series of attacks in Germany have come since July 18 eleven people dead and dozens injured.