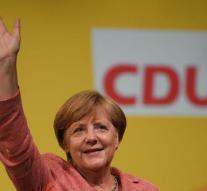 berlin - German Chancellor Angela Merkel does not regret her decision to open the borders of Germany for refugees in 2015. That says Merkel in an interview with Welt am Sonntag.

In August 2015 Merkel spoke the historical words, 'Wir schaffen das'. After that, hundreds of thousands of refugees came to Germany. That caused tensions in her party CDU and led to a growing popularity of the right party AfD.

Yet Merkel would do the same again, she says to the newspaper. In a month there are elections in Germany. Merkel is likely to be re-elected as Chancellor. She has been chancellor since 2005.