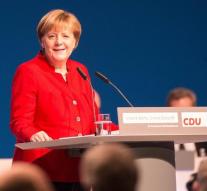 essen - German Chancellor Angela Merkel on Tuesday at the party conference of her Christian Democratic CDU stressed that the refugee crisis of 2015 is not repeated. 'It was and is our clear and my political objective' to prevent a flood of refugees flooded the country, she said.

In 2015, numerous people fleeing war, fleeing persecution or lack of perspective found its way to Germany, Merkel said. They are in Germany as individuals and not included as part of the anonymous mass. The Chancellor thanked the many helpers and officials who 890. 000 people traveled to the Federal Republic, have assisted.

Merkel has also come under heavy fire in their own ranks to lie for her too generous policy critics. That would be the flow of asylum seekers have made so great.