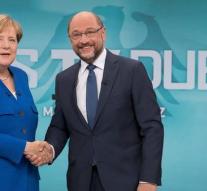 berlin - German Chancellor Angela Merkel (CDU) sees nothing in EU membership of Turkey. 'I will discuss my position with my European colleagues. Hopefully, we agree so that we can stop the accession talks, 'Merkel said in a debate with her German rival Martin Schulz (SPD). Schulz knew to do the same if he was chancellor.

The two German politicians debated for the first and only times for almost ninety minutes in the run-up to the German elections on September 24th. Schulz is Merkel's main opponent in those elections, although her party has a big lead in the polls.