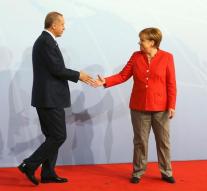 berlin - German Chancellor Angela Merkel has criticized critically about the use by Turkey of an international arrest warrant for the detention of writer Dogan Akhanli in Spain.

'That's not right and I'm glad that Spain has released him now,' Merkel said on an election evening. 'We should not abuse international organizations such as Interpol for such purposes. ''

The German writer of Turkish origin was detained during his holiday in Spain on Saturday but is now again free of conditions. According to his lawyer, he was arrested by the Erdogan government. Akhanli wrote in his books about the persecution of the Armenians in Turkey.

'Unfortunately, Dogan's business is one of many things,' Merkel said. 'Therefore, we have recently changed our policy towards Turkey drastically, because Erdogan is unacceptable. ''