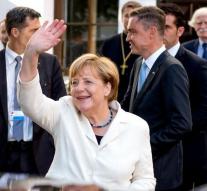 - CDU leader Angela Merkel makes until the spring of 2017 known whether they reset candidate for the post of Chancellor, reports Spiegel. The reason is that President Horst Seehofer of the CSU Bavarian sister party then will decide whether he will stand again behind Merkel, learned the leaf in CDU circles. The problem for Merkel is that at the CDU congress in December will be re-elected for two years as party chairman, but only to answer to her party to a new chancellor candidacy.

Around Merkel fears according to Der Spiegel that Merkel political breakdowns may incur if they kandi agony without the support of Seehofer. Her original plan to envision already re-election in the spring of 2016 they had to move all the autumn in connection with the refugee crisis, now that later.

The next elections to the Bundestag are scheduled in September 2017.


Merkel (62) since 2005 Federal Chancellor. She now rules for the second time in a grand coalition with the SPD. If she took office again, she can record Helmut Kohl, who was last sixteen Chancellor, match.