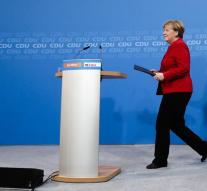 If Merkel as expected at the congress in Essen again elected leader, she could win a fourth term as Chancellor of Germany.