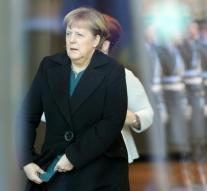 - The German and French governments want the European sanctions be extended against Russia. Chancellor Angela Merkel and President Francois Hollande announced it Tuesday. The two leaders believe that too little progress has been made in the peace in eastern Ukraine.

' It is again necessary to prolong sanctions against Russia, though we had wished that more progress had been made, '' Merkel said ahead of a meeting with Hollande in Berlin. Hollande also expressed dissatisfaction with the state of affairs since the agreement was signed in Minsk last year. Ukraine, Russia, Germany and France agreed henceforth to work towards peace in the region where pro-Russian rebels seized power.

West presented the first sanctions in 2014 after Russia had annexed the Crimean peninsula. EU member states together decide this week whether the sanctions are renewed. An important question is also what the US will do with Donald Trump as president. He wants to improve relations with Moscow.