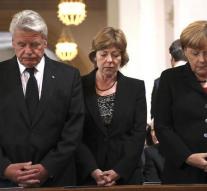 - In Munich on Sunday discussed the attack that killed nine people died on July 22. Include Chancellor Angela Merkel and President Joachim Gauck attended the service in the Our Lady Church at.

Because seven victims were Muslims, not only Christian but also outspoken Muslim prayers. Representatives of the Jewish community were present at the commemoration.

The eighteen-year-old perpetrator of the attack eventually committed suicide.