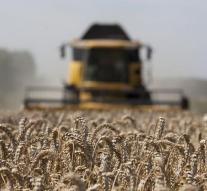 brussels - The proposed acquisition of the American seed trader Monsanto by the German chemical company Bayer strikes objections from the European Commission.

The competition watchdog in Brussels is concerned that the merger is distorting the market for pesticides and seeds, among other things, and conducts in-depth research.

Exploratory research has shown that the transaction can lead to higher prices and less choice, quality and innovation.

The activities of the two companies overlap on multiple fronts. Thus, Bayer offers one of the few alternatives to Monsanto's weed divider Roundup, in which the controversial drug glyphosate is processed. Both companies are also major players in the development of pesticides that are resistant to existing products. This is also the case in the market for biological pesticides and genetically modified plant properties.

Bayer pays $ 66 billion for the acquisition, which would create the world's largest seed and pesticide company. The sector is already dominated by large multinationals. In addition to Dow and Dupont, Syngenta and ChemChina previously bundled their powers. In addition, the committee agreed to protect farmers and consumers.

'We must ensure that there is real competition so farmers can access innovative products, get better quality and buy products at competitive prices,' said Vestager. She has received hundreds of thousands of objections from Europeans concerned.

The research will work closely with the competition authorities in the US, Australia, Brazil, Canada and South Africa. The German BASF and the Swiss Syngenta already showed interest in some divisions that Bayer and Monsanto should dispose of in order to obtain merger.