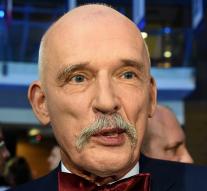 strasbourg - An Italian and a Polish MEP fined and temporarily suspended because they brought the Nazi salute in parliament. The sanction of Parliament president Martin Schulz has been taken by the board of parliament.

The Italian Gianluca Buonanno Lega Nord wore earlier this month, a T-shirt with a picture that was a cross between Chancellor Angela Merkel and Nazi leader Adolf Hitler. A day later he posted a Hitler mustache and he brought the Nazi salute.

The two morning ten days have activities in parliament and must pay a fine of 3060 euros.