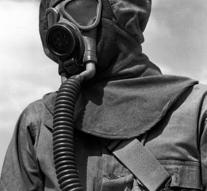 geneve - Two men arrested in the region of Geneva, are suspected of creating, hiding and transporting explosives and poison gas. This has the Public Prosecutor in Geneva Saturday. The two are suspected of Syrian origin, who were arrested Friday in connection with an investigation of suspected terrorists.

The newspaper Tribune de Genève messages first Saturday being sought in this study of four suspects. According to the newspaper the security services and police are very worried because " increasingly alarming facts " ' come forward. The newspaper suggests that the authorities seem to panic and thus the federal judiciary who work badly from the Canton of Geneva.

The threat of terrorism has also resulted in the neighboring France to increased vigilance. There is more directed to the police departments in the Swiss canton of Geneva boundaries.