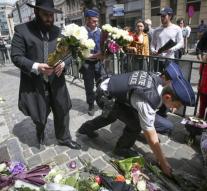 brussels - Exactly one year after the attacks in Brussels, the Belgian government wants to erect a monument in memory of victims of terrorist attacks. That made the Belgian federal government on Saturday. The monument has been earmarked 100,000 euros.

is determined by public tender who can design the monument. The location where the monument will be unveiled on March 22, 2017 is not yet known.

On that day, it is exactly a year since 32 people were killed in bombings at Brussels Zaventem Airport and Maelbeek Metro Station.