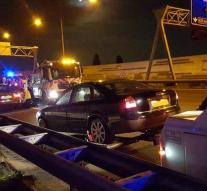 amsterdam - The police arrested four members of a motorcycle club on Monday on Monday that entered two cars against traffic on the A10 at Landsmeer. A firearm was found in one of the cars.

The suspects stated that the reason for haunting was that they tried to escape one or more cars that wanted to drive them.

According to local AT5, motorcyclist was involved which is a member of Satudarah. It would be a liquidation attempt. A police spokeswoman did not want to confirm this. He stressed that the incident had not been shot.