Home / World / 'Melbourne's most livable city in the world ' 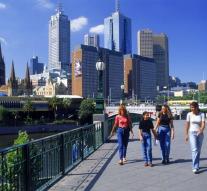 london - Australia, Austria and Canada have the most livable cities in the world. The Australian city of Melbourne has the best performance in terms of stability, healthcare, culture and environment, education and infrastructure. The Austrian capital Vienna is right behind there, like the Canadian cities of Vancouver, Toronto and Calgary.

The British magazine The Economist put 140 cities in the world along the ruler. The top ten is perfected with Adelaide and Perth (both in Australia), Auckland (New Zealand), the Finnish capital Helsinki and the German port city of Hamburg.

Not surprisingly, the Syrian capital Damascus least livable world. The heavily besieged city of Aleppo has not been included in the annual comparison.


The Libyan capital Tripoli, Lagos in Nigeria and Dhaka in Bangladesh scored poorly, often mainly due to lack of stability.

The Economist has just published the top ten most and least liveable cities. It did not occur Dutch cities.