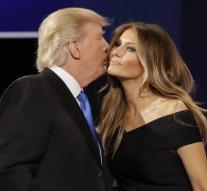 - Melania Trump has forgiven her husband are dismissive and sexist statements about other women. His braggadocio about the groping of women and his attempts to get a married woman between the sheets were for her ' unacceptable and offensive, '' she said.

' This is not the man I know. He feels and thinks like a leader. I hope people like I did accept his apologies and focus on the important issues facing our country and the world are facing. ''

Donald Trump, the Republican candidate for the US presidency, made his comments in 2005, a few months after he Melania, his third wife, was entered into the marriage.