Home / World / Mega-hurricane Florida leaves a trail of destruction behind 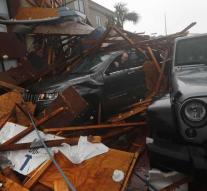 tallahassee - Hurricane Michael has landed in the American state of Florida. The eye of the hurricane passed the coast near Mexico Beach, some thirty kilometers southeast of Panama City, in the so-called Pannensteel of Florida. The hurricane remains strong above the country and leaves a trail of destruction behind.

In Mexico Beach the water flows through the streets and its houses flooded. In the water, debris floats of buildings that have not survived the storm. With wind speeds of 250 kilometers per hour, Michael is the most powerful hurricane to reach the American mainland since 1992, CNN reports. Even before the hurricane came ashore, trees were pulled out of the ground.

More than 2 million inhabitants have received the order or the urgent advice to evacuate. But not everyone has left. ' I am terrified of the people who choose not to evacuate. This is just a terrible storm, 'said Governor Rick Scott to CNN.