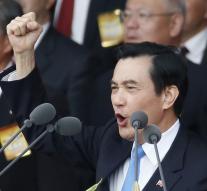 - President Ma Ying- jeou of Taiwan in Singapore Saturday will have a meeting with the Chinese leader Xi Jinping. The office of Taiwan's president has announced it Tuesday.

It will be the first meeting between leaders of the two countries since the end of the Chinese civil war in 1949. Taiwan is an independent country but China regards the island as a renegade province. It wants Taiwan back to China.

According to the office of the Taiwanese president is the purpose of his visit to Singapore maintaining the mutual peace and keeping in position of the current situation. Nothing will be signed and there is no joint statement, said the office.