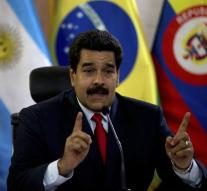 venezuela - CARACAS (ANP)- The controversial 'constitutional meeting' called for by the Venezuelan President Nicolás Maduro for amendments to the political order, was met for the first time on Friday. The 545 members gathered in the parliament building. They went there with images of the founder of the republic, Simón Bolívar (1783-1830), and left-wing populist president Hugo Chávez (1954-2013).

Ex-Foreign Minister Delcy Rodríquez has been appointed chairman of the board. Critics consider the council, called the official National Constituent Assembly (ANC), as an instrument of the Maduro to oppose the opposition.

Maduro claims that despite a boycott of opposition that more than 40 percent of voters have come up to the members to choose. The opposition estimates that percentage at 15 percent. Almost all candidates who have been elected are Chavistas (derived from Chávez) and belong to Maduro's PSUV (United Nations Socialist Party of Venezuela).