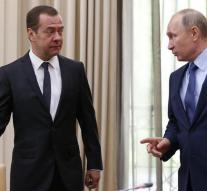 moscow - Russian Prime Minister Dmitry Medvedev has no good word for the new sanctions imposed by the United States.

President Donald Trump signed Wednesday all the heart of the bill that received broad support in Congress. 'The Trump government has shown total powerlessness,' conclaimed Medvedev. 'Very despicable to transfer the executive to Congress. ''

According to Medvedev, the sentence is a 'total trade war'. This means that hope for better relations with the new US government has continued. Medvedev made his feelings on Facebook.