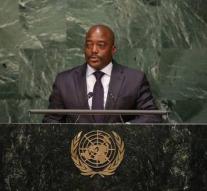 kinshasa - Congo should be held before the end of 2017 elections. Current President Joseph Kabila will not be part of it and do not attempt to make a third term for himself with a constitutional amendment. He resigns after the elections.

That is the core of an agreement that politicians from government and opposition signed Friday in the African country. A mediator from the Roman Catholic Church, who was involved in the negotiations, the result announced. The outlines were last week brought out by opposition leaders, but then remained unconfirmed.

The mandate of Kabila ran on December 19, but he remained at his post.