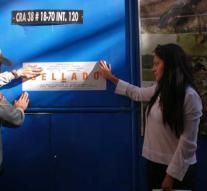 medellín - The Colombian municipality of Medellín has closed the museum dedicated to its most notorious resident, Pablo Escobar (1949-1993). Escobar was a ruthless drug lord who at the height of his power held more than three quarters of the world's cocaine trafficking and smuggling. He was the founder and the boss of the gang called the Medellín Cartel.

The museum was run by a brother of Escobar, Roberto Escobar. It has set it up without an official permit. The museum contained personal possessions of the drug lord. According to the municipality, Escobar caused enormous damage in the city. His brother now has to pay 10,000 euros fine due to his illegal museum.

Pablo Escobar is held responsible for many thousands of murders and attacks, not only on rivals in crime or people who were not bribed, but also on journalists, judges, police officers, civil servants and others. He was killed by the police in 1993 in a house in Medellín where he was hiding.

Escobar lived for a large part of his life on the estate Hacienda Nápoles, 100 kilometers southeast of Medellín. This has become a tourist attraction, including a theme park.