Home / World / Mechanics survive fall with a lift of 32 high 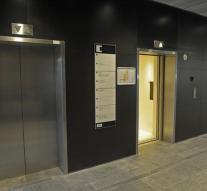 - Two Chinese service technicians with the lift they were 32 floors crashed down on the mend. They survived the fall, Chinese media reported Thursday.

According to People's Daily were the men engaged in replacing cables of the elevator in an office building in Nanjing. Suddenly the lift down collapsed. You may have a so-called buffer mechanism ensures that the elevator was still somewhat slowed down before he came.

One of the mechanics was in severe pain and had to undergo surgery for four hours, the other came with lighter injuries from.