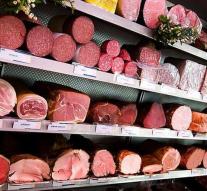 basel - The Swiss police have broken up a gang that mainly meats from France to Switzerland smuggled. Border Guard Basel announced Wednesday that a lorry has been arrested at a check which had 1800 kilos smuggled meats aboard.

The investigation into the 'charcuterie crime' is mid July got underway after tips. Three suspects have been arrested. Border Guard and police estimate that the gang more than 6 tons of meat and drink from France to the more expensive Switzerland has piloted, says Swiss media.