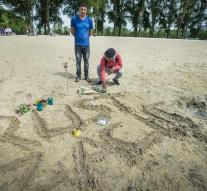 - New-West district takes on the drowning of 5-year Kauane measures to increase safety at the Sloterplas.

'On the three city beaches there is a point of issue for free swimming pools, there are better visible signs that swimming is at your own risk and four hosts are being trained to rescue swimmers,' said district chairman Achmed Baâhdoud.

Rather, criticism of the lack of surveillance of the city's beaches in West was much criticized. The Rescue Brigade had made a plan for supervision at the request of the district but got zero on the run because there was no policy for monitoring open water.

Friends of the girl's parents have in the meanwhile launched a collection. 'The parent needs money to send the body to Brazil. '