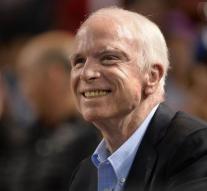 washington - US Senator John McCain (80) has undergone a first series of radiation and chemotherapy.

'His determination and strength are incredible', his daughter Meghan told Twitter. 'The fight goes on, it's about small wins. #fuckcancer. '

In the Republican presidential candidate who lost the election campaign of Democrat Barack Obama in 2008, aggressive brain tumor was discovered in July. He is treated in his homeland Arizona.

A few weeks ago he passed the vote on the abolition of Obamacare, the Care Act, which McCain for the time being continued.