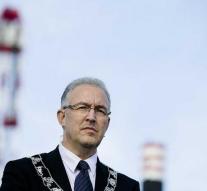 - "Twenty Dutch mayors on Tuesday in Vilvoorde, Belgium participated in a conference on radicalization. Belgian and Dutch cities and municipalities have similar experiences Syriëstrijders and jihadism, reason to share experience and lessons learned."

"The mayors agreed to continue the practice and cross-border cooperation through \"a network of professionals who exchange best practices and share knowledge. \"Among others, Ahmed Aboutaleb of Rotterdam, Jozias van Aartsen of The Hague and the mayors of Gouda, Zoetermeer and Delft participated in the consultations, as well as National Coordinator for Counterterrorism and Security Dick Schoof."

"Antwerp and several municipalities in the Brussels region also delegated their mayor, but the city of Brussels, Yvan Mayeur, was absent. According to his spokesman for agenda reasons."