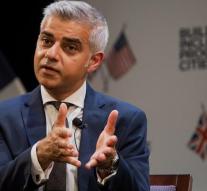 london - The mayor of London, Sadiq Khan, is fighting for the air pollution in his city. He announced a series of measures for a healthier environment on Friday.

For example, owners of old dirty cars in the city center will pay extra tax from October, and there will be an environmental zone in that area that is destroying certain diesels. From 2018, new taxis will only be electric. There will no longer be licensing for diesel taxis. From the same year, no new diesel dump trucks will be purchased and the cleanest buses will be used on routes in the most polluted areas.

'I've found that polluted air is damaging health. Recently, I have asthma, 'Khan gives his actions a somewhat dramatic personal touch. 'I'm also older and like many others worried that some of London's heaviest polluted places are around schools. Our children are exposed to dangerously polluted air. '