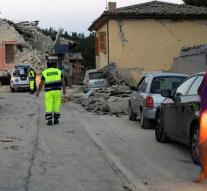 rome - According to the mayor of Amatrice, the earthquake caused much damage in the village in the province of Rieti.,, The roads are closed in and to the village. Half the town's gone, '' Mayor Sergio Pirozzi reports across RAI.

,, There are people under the rubble, '' says Pirozzi who also know let that bridges have collapsed. Amatrice has about three thousand people.

The earthquake occurred at night around 03. 30 pm.