Home / World / 'Maybe I should have gone' 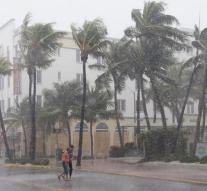 miami - In Miami, a little bit more suicide breathes because the eye of the monster cannon Irma does not seem to go straight across the city. However, the danger to the metropolis is still far removed, because the wind and the flooding can cause enormous chaos for days to come. 'Maybe I should have gone,' says Dutch Chavely Helena.

Many shelters are now full, in anticipation of Irma arriving in Florida from two o'clock in the night (local time, 08.00 o'clock in the morning Dutch time). It's the biggest evacuation that ever known Florida, where one gets used to hurricanes.

Now it's raining and blowing blades of the numerous palm trees in The Sunshine State. Downtown Miami and the famous Miami Beach, which is usually so lively and where roller skaters and mountain bikers cross the hail-white beaches are ghost spots. Gas stations and restaurants are closed.

The Dutch Chavely Helena, who lives in Florida, ventured into the street for candles. Because the current in her building would probably fall out quickly. You are on your own. There's no hospital to visit, not a police on the street, you're really on your own, 'says Dutch who works in the pr industry in America. 'Not all areas in Florida have been evacuated. Helena dares to stay in her house, but now has doubts. 'Maybe I was too fast-paced Dutch. And should I have to go, 'says Helena, carrying all her money and other valuable possessions in a big plastic bag. 'It can be just that we are swimming tomorrow or the day after tomorrow. '

Behind her are huge construction cranes in downtown Miami. A lot of new construction takes place in the city. The tall cranes could not be finished in time, as it takes two weeks.

Like the many high impact windows in Florida, the cranes can handle high wind speeds, up to 230 kilometers per hour. But in some places Irma blows harder and is it therefore the question of whether the cranes will remain upright.

A little further down on Brickell Key, an artificial island for the high-rise town, Jop Vos remains with his Bolivian wife and two children in his apartment to resist Irma. The Dutchman who works for the company Coulisse from Miami has great faith in the concrete construction of his flat which also has a generator for the power failure. 'Probably we'll hear the shutters for our windows for hours long and it will be a long night. I do not underestimate it, but we're safe here. '