Home / World / May, Trump and Obama not invited to Harry's wedding 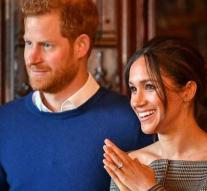 london - British Prime Minister Theresa May has not been invited to the wedding of Prince Harry and Meghan Markle. Opposition leader Jeremy Corbyn is also not allowed to stop, the BBC reports.

Many foreign prominent people also seized an invitation to the royal wedding on 19 May. For example, Barack and Michelle Obama are not on the guest list, which counts 600 names. Also the American president Donald Trump is not there. The couple does invite a twelve-year-old girl who survived the terrorist attack in Manchester.

According to the BBC, Harry and Meghan do not have an 'official list' with political leaders who are invited. According to Kensington Palace, this has to do with the size of the church. Moreover, Harry is the fifth person in the line to succeed Queen Elizabeth.