Home / World / May: Too much tolerance for extremism 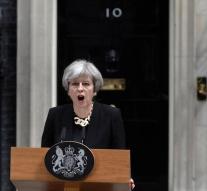 london - British Prime Minister Theresa May believes there is too much tolerance for extremism in the United Kingdom. At a press conference on the two attacks that took place on Saturday night, she condemned the 'wicked' ideology of perpetrators. 'It's time to say enough is enough. The perpetrators of the attacks all had one thing in common: a radical Islamic background. There must be harder opposition. '

May indicated that anti-terrorism policies and laws are being held against light. The police must therefore have more opportunities to intervene early. May also claims that internet companies are doing more to online hate speech.

May also says that five recent attacks have been canceled. This year, Britain has been hit three times by a terrorist attack.