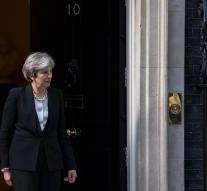 london - British Prime Minister Theresa May is going to attend a meeting held in the Cabinet Office Briefing Room (COBRA).

The COBRA is used in case of national disasters. Several security services will be at the table.

On Friday, several people were injured in a terrorist attack on the British capital subway.