Home / World / May through the dust to 'mess' 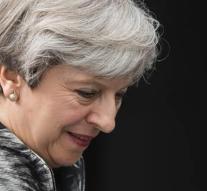 london - British Prime Minister Theresa May offered his fellow Members apologies Monday for the disappointing election results. 'She said,' I'm responsible for this mess and I'm the one who takes us out, 'said a conservative MP.

May stated during a meeting with partymates that she 'will serve us as long as we want her,' said the source. Although many Tories are in their stomachs with the election results, party members cheer up the reporter's report shortly.

Although the May party last week became the largest in the elections, the Conservatives lost their parliamentary majority. That was not what May had in mind when she sent the country to the polls. The prime minister just wanted a stronger mandate to negotiate the brexit.

Several parliamentarians, who wanted to remain anonymous, said that in May, May may not be afraid of her position. There would be little animos for a new battle for the leadership of the conservative party.