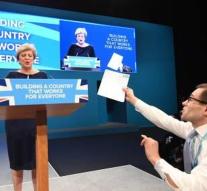 manchester - The speech of British Prime Minister Theresa May as a conclusion to the annual Conservative Party's Conference fell on Wednesday. Shortly after taking the floor, a comedian entered the stage to interrupt the speech. Soon after, a coughing and spitting May lost her voice and there were new interruptions.

The comedy Simon Brodkin (artist Lee Nelson) was on the front row when May began to talk. He jumped on and handed her a so-called P45 form that is usually given to people leaving their jobs. Brodkin was taken away and May was given the room with the comment that she knew someone for such a form, namely opposition leader Jeremy Corbyn.

The Prime Minister then encountered voice problems that forced her to interrupt her speech repeatedly to drink a glass of water. Her backbreak encouraged her to continue.

May announced in the speech, among other things, new homes and a maximum price for energy.