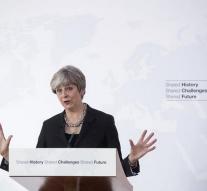 florence - Prime Minister Theresa May tries to seduce the EU with an olive branch soon to negotiate the future trade relationship between the EU and the UK. In a speech about the Brexit in Florence she beat a reconciliation tone, but she did not really understand the most controversial subjects.

However, she stated that there would be a two-year transitional period after the British departure, which should take place irrevocably on March 29, 2019. During that time, May wants the UK to have full access to the single market.

She made it clear that her country will fulfill its financial obligations to the EU during that period. But that can hardly be called a concession, as the British are legally obliged to contribute to the EU budget for the years 2019 and '20. 'It is in everyone's interests that the negotiations succeed,' she stressed.

The capital of Tuscany was not accidentally chosen as a place for MAY's speech, which was widely anticipated. It was in the early centuries the center of the European banking system and a vibrant trading center, even before there was any such thing as a European Union. The British would prefer nothing but to talk about a future trade relationship with the EU immediately.

Mays's message was reconciliation and that wanted to shine out in everything. The logo behind her spoke book parts: 'shared history, shared challenges and a common future', read. But then without the UK in the EU.

Three months of Brexit negotiations have so far been unsatisfactory. Monday, a new round of negotiations will begin in Brussels.

Before the 27 EU countries want to talk about the future, first progress has to be made on three issues: the rights of EU citizens in the UK, the border between Ireland and Northern Ireland and the UK's final account. In October, EU negotiator Michel Barnier talks to the Heads of Government, but it is not expected that they will turn green on the next step.