Home / World / May: judge to the extreme right 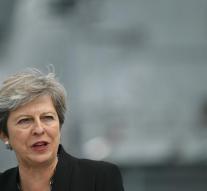 'I see no equivalence between fascists and their opponents,' said May Wednesday.

With her statements, May seems to take away from US President Donald Trump. Who showed a press conference on Tuesday for protesters protesting on Saturday in Charlottesville against the removal of a statue of General Robert E. Lee. Trump: 'Washington and Jefferson also had slaves. Do they have to leave their statues? Is George Washington in turn next week and Thomas Jefferson? What does this mean? '