Home / World / May is heading for new defeat 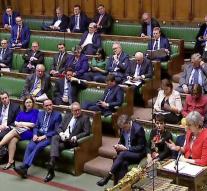 amsterdam - British Prime Minister Theresa May is heading for a new defeat about her Brexit deal tonight.

The spokesperson for the DUP, the party of Northern Irish unionists holding up May's government, has already voted against if May put its new proposal to the vote tonight. The hard core of the Brexiteers, led by Jacob Rees-Mogg, also announced that they would not agree with the amended agreement.