Home / World / May heightens threat of threat to criticism 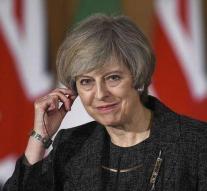 london - British Prime Minister Theresa May has adjusted the threat of attacks in the country from 'serious' to 'critical'. That is the highest level.

May took that decision on Friday night after the attack in London's underground earlier in the day. The latter is claimed by Islamic State.