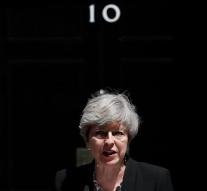 london - British Prime Minister Theresa May sharply condemned the attack on mosque visitors in London. 'It was another attack aimed at ordinary and innocent people,' said May outside her office. 'This time it was after praying British Muslims who left a mosque.'

May promised Monday that 'this kind of hatred and wickedness' will never prevail. It was the second time this month that the British capital was upset by an attack. Previously, several men drove by bus on pedestrians crossing the London Bridge.

The Prime Minister called it into mosque visitors 'as horrific as previous attacks. 'She said that extra police were deployed' to reassure communities. 'Also, the May authorities see whether mosques need extra security.