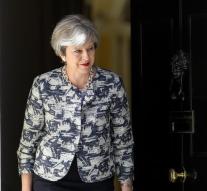 london - British Prime Minister Theresa May reached an agreement with the Northern Irish DUP on support to the government of its Conservative Party. That's what the BBC reports. May needs the support of the small Protestant party since she lost her majority in the House of Commons earlier this month in early elections.

With the ten seats of the DUP, May is again insured of sufficient support to launch legislation by the British parliament. The DUP will not be part of a coalition.

May received Arlene Foster, the leader of the small Protestant party, in her office on Downing Street. Foster said after her arrival in London that she hoped to reach agreement with May on support for the Conservatives government.