Home / World / May British Prime Minister is afraid of crisis 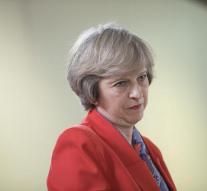 london - British Prime Minister Theresa May is afraid of a 'full constitutional crisis' in Great Britain and Northern Ireland as a result of the Brexit referendum. If Northern Ireland, Wales and Scotland will not follow the English on leaving the European Union, London is in charge.

Scotland has the weapon already prepared for another course: a referendum to break away from Britain. To avoid Edinburgh holding such a plebiscite and that Wales and Northern Ireland to follow suit, they have to come and talk to the leaders of the three states invited Monday.

In England and Wales chose a small majority in the referendum on June 23 before leaving the EU. The Scots and Northern Irish were against. May has her three fellow premiers to start offered a direct line with Minister Davis, the man who leads Brexit. Wales, Scotland and Northern Ireland allowed its direct say on leaving the union.

Further, the prime minister a forum in which all four states equally have a say about how Brexit have expired.