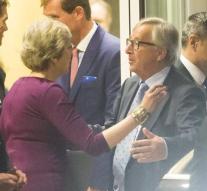 brussels - British Prime Minister Theresa May and the President of the European Commission Jean-Claude Juncker agreed on Monday evening at a dinner in Brussels that more and more brexit negotiations should be made in the coming months.

They described their meeting, which took about two hours, in a joint statement as 'constructive and friendly.' Both leaders have evaluated the progress so far on Article 50, which regulates EU retirement, and agree that 'the pace of efforts must rise'.

May and Juncker also discussed common global interests, such as ending the nuclear deal with Iran and improving the security of European citizens through cooperation in the fight against terrorism.