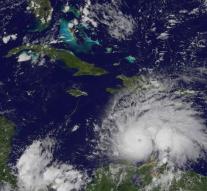 - Hurricane Matthew, who moves toward Jamaica and Cuba, Friday (local time) grown in strength and become the first major hurricane in the area since 2007. Matthew now has a strength with winds of 260 kilometers per hour which he can destroy homes, according to meteorologists.

The hurricane, which on Friday over seven hundred kilometers southeast of the Jamaican capital Kingston was, has been classified by the US National Hurricane Center in the heaviest category.

Matthew expected to reach Monday (local time) when a severe storm the south coast of Jamaica, which is also the country's only oil refinery next to the capital.

The sunny weather kept many residents of Kingston there Friday not to store water and food. Earlier this week, a person by the storm to living in Saint Vincent and the Grenadines.

Felix was the last big storm over the Atlantic in 2007.