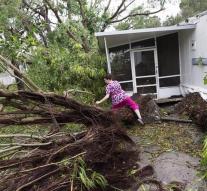 - Hurricane Matthew is mitigated by the National Hurricane Center (NHC) in Miami to a post-tropical storm. The storm raged Sunday over the states of North Carolina and Virginia and caused flooding and power outages.

After he killed hundreds earlier caused in Haiti caused Matthew since Thursday for extreme rainfall and strong winds to the southeastern coast of the United States. On the route of the storm along the coast, more than two million homes and offices without being electricity. In the states of Florida, Georgia and North Carolina, eleven people died.

The total death toll now stands at 892. Matthew Besides the regrettable eleven deaths in the US, there were four deaths in the Dominican Republic, and certainly 877 in Haiti.