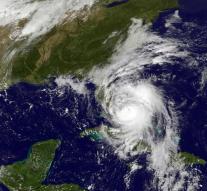 - Hurricane Matthew Friday has lost some momentum. He moves in a northwesterly direction and reaches wind speeds of up to 195 kilometers per hour along the east coast of Florida (category 3). When the hurricane struck Haiti Thursday, he did so with speeds up to 230 kilometers per hour (category 4).

The National Hurricane Center in the United States reports that Matthew travels at a speed of about 20 kilometers per hour in the northwest. Despite the slightly decreased wind speed, the damage caused by the storm in the southeastern coastal states are expected to be significant. The eye of the storm approaches currently the east coast of Florida.

In the Caribbean, the legacy of Matthew has consisted of about 340 deaths and considerable material damage.