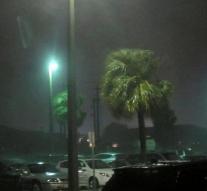 port - Hurricane Matthew has declined in strength and now attracts along the US state of Florida. The number of victims in the hard-hit Haiti meanwhile continues to rise. The Dutch Ministry of Foreign Affairs has made available 750,000 euro in humanitarian aid for the Caribbean country and aid organization Cordaid 50,000.

In the Caribbean are about 340 deaths, mostly in Haiti. In which country is the huge damage. Main roads are impassable, bridges destroyed and broken mobile networks. Hundreds of thousands need immediate assistance. There is lack of food, water and sanitation. The disaster team of the United Nations has been active in the country.

Public life on the east coast of Florida on Friday will partly lie still because of the passage of the hurricane. Walt Disney World Friday remains closed all day. The Universal Orlando and SeaWorld parks do not open. Airlines have canceled flights in 2500.

A successor to Matthew already hangs in the air: Nicole, a tropical hurricane, still in the first category.