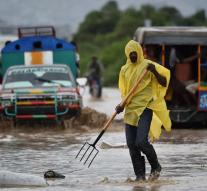 havana - Hurricane Matthew has passed in the night from Tuesday to Wednesday Cuba and is now en route to the United States. Cuba reached hurricane winds of 140 miles per hour.

The major hurricane (category 4) creates a lot of damage. In Haiti, where Hurricane previously passed so far two deaths and four in the Dominican Republic. The poor Haiti would look through the ravages against the greatest humanitarian crisis in years. Thousands of people were left homeless.